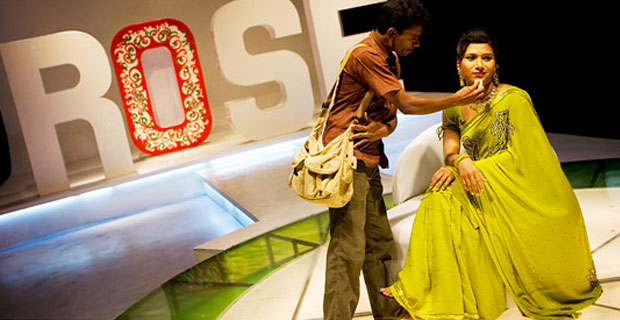 In the mid-nineties, the famous activist-actress Priya Tendulkar interviewed a transgendered person on her talk show for the first time on Indian TV. Educated, well-attired and sophisticated, he cut a very different on-screen image than audiences were used to seeing. Because back then anyone who wasn’t heterosexual was represented in the media as either bawdy or plain amusing and basically a social misfit.

Over a decade later, we’re about to see India’s first transgendered talk show host in Ippudikku Rose (Yours, Rose) in a Star Vijay TV production series. From The New York Times article by Amelia Gentleman, “Tackling a Society’s Boundaries, on TV and in a Family“:

India’s newest talk show host, billed as the local Oprah Winfrey, hitched up her sari and looked for her stylist’s approval. “Very feminine. You look gorgeous, like a goddess,” he said, smiling reassuringly, as he braided a garland of fresh jasmine into her hair.

A complex procedure even for experienced hands, the process of tying a sari is particularly hard for Rose, who was raised as a boy, and used to be known as Ramesh Venkatesan. Her mother never taught her the skill and refuses to see her wear one. Even so, the outcome was flawless.

According to the Times, the show is to be aired to 64 million people in Tamil Nadu and is most likely to cause a sensation:

The show’s director, Anthony Thirunelveli, said the half-hour talk show had been conceived as a program suitable for family viewing but would discuss issues of sex and sexuality, confronting “hush, hush, under the carpet subjects.” The first nine episodes will tackle, among other things, divorce, sex and relationships among the mostly young employees in India’s call centers, and sexual harassment.

The main attraction will be Rose herself, who now goes by only one name. A poised, 28-year-old, American-educated former Web site designer with a master’s degree in biomedical engineering, she started wearing women’s clothes full time four years ago and is still waiting for acceptance from her family and society at large.

But that acceptance may not come easily. Over the decades, the tawdry appearances of hijras and comical representations of homosexuals in popular film, for the most part, have deepened the social divide. Pradeep Milroy Peter, who leads programming at Vijay, the Tamil-language channel is nervous about the release. In his interview with the NYT:

“We don’t know how much acceptance there will be,” he said, straining to make himself heard as builders, electricians and lighting technicians hurried to finish the set. “We are crossing our fingers. The market has a craving for talk shows, but this one comes with a difference. It’s very experimental.”

His anxieties are understandable in a country where the boundaries of sexual tolerance are shifting daily, with much uncertainty and unpredictability. Fashion TV was briefly banned for showing too much flesh; a film star’s career was threatened after comments that appeared to condone premarital sex; and fringe political groups like nothing better than to stir noisy (and often spurious) paroxysms of moral outrage.

Rose, intent on educating people in her very succinct, bilingual speech elaborated on the difference between transsexuality and intersexuality. She encouraged people to adopt an inclusive approach towards those with varied gender identities. In her interview with NYT Rose talked about her expectations.

“Transgenders in India are seen as immoral and evil,” Rose said, calmly leafing through the script of her first show — an interview with a prostitute about her recently published autobiography. “I will break that image by being articulate, intelligent and a bit like the girl next door.”

“This is a radical development,” she added. “There have been transsexuals in Indian movies, but always as the object of ridicule or as villains. This is the first time in the history of Indian television that a transgender person has been featured as a television anchor.”

But Rose won’t be alone. Last year, the Times carried a piece about Ali Saleem, who anchors the naughty talk show “Late Night Show With Begum Nawazish Ali” on Pakistan TV. From Salman Masood’s article, When She Speaks, He’s Breaking All of Islam’s Taboos:

When Mr. Saleem takes to the airwaves, he is Begum Nawazish Ali, a coquettish widow who interviews Pakistan’s glitterati and some of its top politicians.

A real woman could not possibly do what Mr. Saleem does. In the unlikely event a station would broadcast such a show, the hostess would be shunned. And taking on the guise of a married woman — whose virtue is crucial to her whole family — would be equally impossible.

But apparently a cross-dressing man pretending to be a widow is another matter entirely.

The Begum of the late night show is a “a middle-aged widow who, in glamorous saris and glittery diamonds, invites to her drawing room politicians, movie stars and rights advocates from Pakistan and India” and very provocative. About her on-screen persona:

With fluttering eyelids and glossy lips, Begum Nawazish Ali (Begum means Lady or Mrs. in Urdu) flirts with male guests using suggestive banter and sexual innuendo. With female guests, she is something of a tease, challenging them about who looks better. Questions are pointed and piercing. Politics, democracy and saucy gossip are enmeshed in her conversation.

The show has been running for one and a half years on prime time and is rerun twice a week.

Mr. Saleem sees the show’s acceptance and commercial success as a testimony to the tolerance and moderation of Pakistan, a country often seen by the outside world as teetering on the edges of militancy and extremism.

In an MSNBC article titled In Pakistan, the Biggest Star is in Drag, Hasan Zaidi talks about the success of the show. From the article:

So popular is the show that advertising rates during its weekend prime time slot are triple that of other shows in similar slots. Saleem is now one of the highest paid television hosts in the country and is constantly receiving offers from rival channels to bring the show to them.

During an arduous three-hour hair and make-up session before the recording of a show, Saleem was philosophical about the reasons why the show has clicked with audiences.

“I think Begum Nawazish Ali inspires women in particular because she is a strong, glamorous, opinionated woman who is unafraid of saying what she thinks and of flirting with men if she feels like it,” explained Saleem. “Men, on the other hand, find her intriguing because she transcends all kinds of restrictions and plays with their imagination.”

“I think Begum Nawazish Ali inspires women in particular because she is a strong, glamorous, opinionated woman who is unafraid of saying what she thinks and of flirting with men if she feels like it,” explained Saleem. “Men, on the other hand, find her intriguing because she transcends all kinds of restrictions and plays with their imagination.”

Rose’s task is surely not an easy one. Not only will she be talking about things people deny the existence of, she’s doing it in a saree and not the clothes she “rightly” should. Soon enough, we’ll know whether Ippudikku Rose scales the TRP charts or is ousted upon its release. Until then, let us know what you think.