Q&A: Chris Murray, founder of the Govinda Gallery in DC 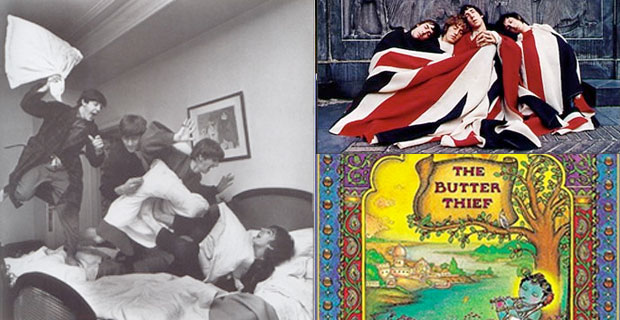 The Govinda Gallery of Georgetown, DC has been collecting and exhibiting iconic images of musicians for decades, among them The Beatles, Jim Morrison, Bob Dylan, and the Rolling Stones (and The Who, pictured here by Art Kane). The gallery opened in 1975–it was named ‘Govinda’ because it connoted the “source of all pleasure,” in the words of Chris Murray, the founder-Director of the gallery. SAJAforum asked Murray a few questions about his roots in the 60s, and the influence of ISKCON.

Jyoti: So, just how did the name Govinda come about?
Chris: One day I was walking through this beautiful park in Washington and the thought ‘Govinda Gallery’ came to my mind. I had then – that was in 1975 – and I still have a deep love for Indian culture. I have been to India twelve different times for pleasure, both spiritual pleasure and tourist pleasure.

So I had Indian on my mind. I was into in yoga and meditation. I had graduated from university in Georgetown in 1969. And at that time there was a renaissance of sorts of interest in things Indian in America… Indian music through Ravi Shankar and the Beatles… so many stylistic things! Mary Mcfadden was collecting Indian art. There was so much interest in India because of its deep spiritual culture, because at that time many people in America were inquiring about spiritual life as opposed just to material life. So it was just the times!

So I thought the name Govinda Gallery and when people ask me what it means, I tell them a loose translation. I tell them it means it’s ‘the source of all pleasure.’

We don’t show Indian art there, we never have. So it’s not the mission statement for the gallery. The approach to exhibition is curatorial identities. It’s not wrapped up in the name Govinda, there’s no Indian art… or art of the Vedic culture. It’s what I personally enjoy and am wrapped up in. So for me it’s wonderful that it did become that name.

Since then I have published two books, that I have been the coauthor of with Kim Waters on The Butter Thief and Illuminations from the Bhagavad Gita. But in 1975, when I opened Govinda Gallery it was several years before the books would come out.

In the 70s it was extraordinary. Swami Bhaktivedanta was there on my first trip. I went to hear his lecture in Vrindavan and Mayapur in West Bengal. I had the good fortune to hear him speak at least twice a day, see him on the morning walk, I had the fortune to be there. Period. In the seventies I was very much a student and learning so much. In the eighties Swami Bhaktivedanta was no longer with us, I started going more regularly. In fact, I went five winters in a row, from 1982-87 I was there in February. I went there to take a break, I learnt so much when I was there. I like traveling like that where you are learning and enjoying.

Jyoti: Tell us about your experiences with your guru, Swami Bhaktivedanta (A.C. Bhaktivedanta Swami Prabhupada).
Chris: He was a such a great international teacher, he established such a movement in America. But he was a great singer a great musician, a great poet, a great chef, a writer and he was a great dancer too. He could do all of the arts. He had all those qualities. I have seen him play drums, percussion, harmonium and sing. He could do all of those things. I witnessed it. He was the most complete individual I’ve met in my entire life. He could do all those things expertly. And not only expertly, but amazingly pleasingly. Best art – great technique with great results. He was Bhaktivedanta. He had vedanta – knowledge and he also had bhakti, the feeling, the heart. He was the perfect combination between expression and formalism.

Jyoti: You’ve published The Butter Thief and Illuminations from the Bhagavad Gita. The illustrations are very stylistic and use Indian motifs and colors. How did it come together?
Chris: I collaborated on those books with Kim Waters, who is an extraordinary artist. She did all of those illustrations. All those elaborate designs and ornamentation, decorations are all hand done, nothing is done by stencils. It took her five years to complete all of those illustrations. I worked with her on the designs of many of the pages and also the edited the book, selected and edited the verses from the Gita that we used, and wrote the introduction. And generally assisted in the project. We are the coauthors of the book. It’s been a very popular book. Its been in print for so many years. Originally it was printed by Harper Collins in New York City in 1981, and been republished several times ever since then by Mandala Publishing group, hard back edition.

We also published The Butter Thief which is a children’s book which is dedicated to our son David Murray. We loved Vrindavan very much. It was a chance to make a children’s book. We just adapted it and retold it for a new audience, keeping the same story of course. Its been wonderful to do a couple of projects as tributes to Indian classical art.

And Kim’s style is combination of classical Indian art and her own unique style as an artist. But everything is done very carefully so that it’s completely consistent with the traditional iconography of great painting of Vedic themes down to the pink souls on Krishna’s feet and the hair, everything is done according to traditional way, by a contemporary artist.We were fortunate to do something to offer to him. He passed away before Illuminations was published, but we showed the project in the early stages, and he said we were introducing a new art form to this culture.

Jyoti: Was it difficult to write on a theme you were far removed from spatially and temporally?
Chris: I came from a different time but I certainly did appreciate the great love between a mother and child, and that’s what the book is really about: its about Krishna and his mother’s love for him and his love for her. I really adapted it from Sri Bhaktivedanta’s Krishna book. He retold from the Vedas these past times. While it was enjoyable for young people it was really of great philosophy for adults learning the Vedas. It’s a highly elevated, philosophical book.