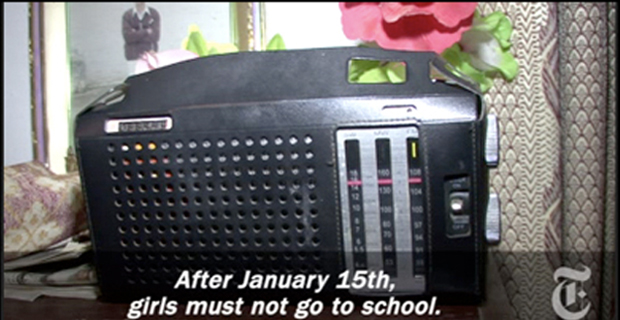 “In the area where I live there are some people who want to stop educating girls through guns,” says Ziauddin, after 200 girls schools have been forced to close down in the Swat valley, Pakistan, over last year.

This is the theme of a moving online video by The New York Times’ Adam Ellick and Irfan Ashraf, “Class Dismissed: Education in Swat Valley” [alternately subtitled “The Death of Female Education”].

SAJAforum interviewed Ellick about the making of the video.

The 14-minute story takes us through the region while narrating the story of Ziauddin, who runs a private school for girls, and his bright 11-year old daughter Malala, who is pursuing the seemingly futile goal of becoming a doctor.

The documentary opens with serene shots of the valley and, just as sounds of civilized society begin to filter in, gunmen open fire, bombs blast and insurgents take control. Images of burning houses, torn-down classrooms and deserted markets follow, as well as some gruesome scenes of Taliban-style justice. From the narration:

Since 2007 Swat has become Taliban territory. Those who defy the militant strict codes of Islam are publicly punished. And those are the lucky ones. Politicians and social activists are murdered and their corpses displayed in the center of the capital Mingora. Last week the government signed a truce with the Swat Taliban agreeing on a form of Islamic law. Some people now fear that the Taliban are even more emboldened. While boys school remain open, more than 200 girls schools have been blown up by the Taliban.

There are 12,000 Pakistani troops in Swat. But since last summer, they have been unable to quell the 3,000 Taliban fighters and their guerrilla insurgency.

Perhaps the stars of the documentary are young Malala and the other girls in the valley who bravely make the case for female education, even giving stirring speeches, in English, out in the open. An excerpt of the speech was shown:

“Swat Valley: the land of waterfalls. Lush green hills and other gifts bestowed upon it by the nature. But my dear friends, today, Swat, has in the past few years become a heartland for Pakistan Islamic militancy. Today, this idyllic valley of peace is burning. Why the peace of this valley is destroyed? Why our future is targeted? Schools are not places of learning but places of fear and violence. Our dreams are shattered. And let me say, we are destroyed.” 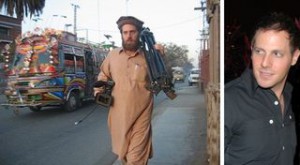 SAJAforum spoke to Ellick about getting permissions, his general mobility as a foreign journalist and whether he was in fact endangering his subjects by interviewing them. Above are two images of Adam. One of him in New York and the other of him incognito in Pakistan. Apparently, his cover worked well: people spoke to him in Pashtu, the local language, and thought he was a local.

Ellick told us he had limited access in Pakistan, especially Taliban-controlled territory. He worked with a local contact who did the filming in Swat and sourced the remaining outdoor footage from local TV stations, credited at the end of the documentary. The interviews with Ziauddin and Malala, he did himself.

What comes together in his captivating documentary is a piece of the reality of Swat – its gradual destruction, and the few fearless civilians fighting against injustice. Public punishments, a beheaded corpse, banners ordering women to stay home, the veiled Taliban men pointing guns at civilians are some of the vivid images from his documentary.

Ellick spent two days screening, talking and making sure they had some access to his characters. First, Ellick admits, both agreed to being filmed and spoke English.

Ellick: When you’re talking about Americans who don’t know where Pakistan is and don’t know where Swat is, you have to make it accessible to them and when someone speaks English they can relate to the character so much more. As opposed to subtitles and translations which is also a solution but not an intimate solution.

But more importantly, both seemed seriously affected – the situation in Swat not only threatens to end to Ziauddin’s 14-year career, it also crushes the hopes of his daughter to have one.

Ellick: You have everything here. You have the father losing the school and the daughter losing her education. Put those two together and its perfectly emblematic and representative of what’s happening in Swat. People are losing their education in Swat and losing their livelihood in Swat. Everything that was happening on the wider scale was represented here under one roof of this house.

More about the process, gaining access, understanding the issue and making the story come together:
Spending two days with them before I even took out my camera was something that had to be done to develop a chemistry and a rapport and a comfort level with him and his daughter. And also to understand the complexity of the story as opposed to a network news story to shoot and slam, bam, thank you, we’re done, we have what we need kind of approach.

It was a more contemplative and gradual approach and really trying to understand who there people are and what are the delicate and complex issues facing them.

But the story wasn’t all Ellick was thinking about. “Ironically, I spent a significant amount of time talking to the characters about their safety and convincing them not to do the story,” says Ellick.

Upon contemplation, Ellick figured that Ziauddin’s safety was a moot point at this stage, especially when he was quoted virtually every day by the local press and was definitely on the Taliban’s radar. And together they decided that to go ahead would only add visibility to Ziauddin’s story, “especially when the Head of Pak military is in DC when the story comes out.”

Evidently, Ziauddin, too, has his reasons for participating in the documentary. While it is increasingly unsafe to stay in Swat and a quarter of the residents have left the city, he is determined to fight back. Ziauddin:

It may be my idealism or you may call me a crazy person. But when I am asked by my friends that why are you not leaving Swat, I often tell them that Swat has given me a lot and now when Swat is in trouble, like a good friend I should stay in Swat.

His daughter, both quiet and fierce at once, finds ways to make peace in her heart regarding her father’s safety:

I might get brain hemorrhage because of that pressure that why I left my people in hard days… I should have been beside them. I must bring them out of that quagmire. This is my duty and if I die for it there will be no better chance for me to die than for this.

They can’t stop me. I will get my education if it is in home, school or any place. This is our request to all world that save our school, save our world, save our Pakistan, save our Swat.