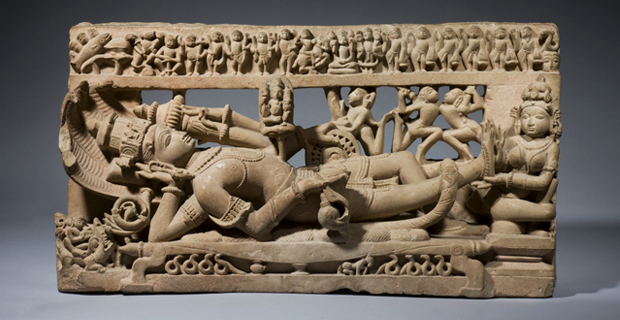 He writes up God Krishna as a playboy. Compares a sacred ritual―where the god is given a symbolic bath―to a foot scrub at a seven-star spa. To him, Shiva’s celebrity was affected by his “exceptional luck with branding.”

An incredibly simplified, yet factually correct interpretation of Hindu iconography and symbolism in the visual arts, and to some extent, of Hindu thought. It might throw some in a fit of fury, young and old―annotating from recent research or quoting verses from scriptures, interspersed with cusses―a visual I can imagine and erase at will, sitting here in Houston.

In his article, Cotter walks us through the museum galleries, and back. “Hindu sculptures are no ordinary things” writes Cotter. “They’re cosmic implosions, concentrations of spiritual energy so dense as to turn physics inside out. They funnel light from other universes into our mundane world. And they do so consciously, with intent.”

Cotter goes on to emphasize how the depictions of the gods are every bit like us. He says, “They’re moody. They’re conflicted. They fall in and out of love. They act generous, then are withholding. They preach peace but are usually armed to the teeth. They embark on big feel-good social projects, like creating the world, then have doubts, regrets, urges to trash their work and start again.”

Later on in the article, he launches into an intense, full-bodied description of the Holy Trinity complete with message and meaning. Holland Cotter, has studied Sanskrit and taught Indian and Islamic art during his M. Phil at Columbia University, has been a staff art critic at The New York Times since 1998. Read on:

Basking in the Presence of an Ever-Changing God, from last week’s NYT by Holland Cotter.

“Vishnu: Hinduism’s Blue-Skinned Savior” runs through Oct. 2 at the Brooklyn Museum, 200 Eastern Parkway, at Prospect Park; (718) 638-5000, brooklynmuseum.org. The exhibition has been curated by Joan Cummins, Lisa and Bernard Selz Curator of Asian Art at the museum.