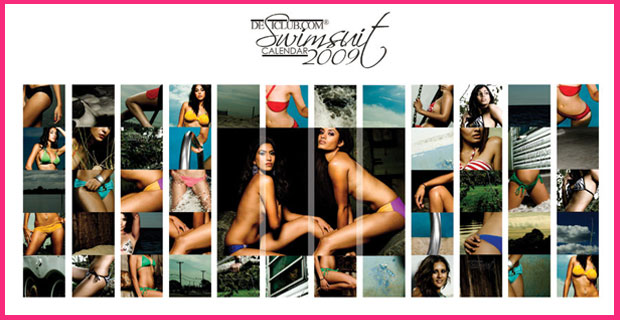 Starting the new year with the proverbial “bang” are the cast and crew of Desiclub.com’s newly launched 2008 Swimsuit calendar, which is selling for $19.95 on their website. Women clad in designer beachwear are photographed roaming secret grass dunes, seascapes, white sands and such, of the exotic-exclusive beaches in the Hamptons, New York. The calendar prides itself to be the only calendar that showcases North American women of Indian, Pakistani, Bangladeshi, Nepali, Sri Lankan, and West Indian descent.

Producer-publisher Ojas Vaidya aims to “entertain and bring a new perspective on the South Asian attitude toward beauty, fashion, and style” which has been achieved by the team rather well.

However, the above-mentioned South Asian perspective is compromised in places when the lustfulness takes over beauty (body parts Vs face), which begged for a little more attention.

Last years inaugural Sexy South Asian Girls 2007 Calendar had created some controversy because it showed bikini-clad South Asian women, many of whom were from the Muslim community. SAJAforum interviewed Desiclub’s Saroosh Gull last year (“A Calendar Pushes the Limits of South Asian Sexy”) – he maintained that they “could have done something more conservative, but then what would be the point of that as our main goal was to bring South Asian models into the mainstream…” To put his point across clearly he even scaled up the sexiness factor during the photo shoots for artistic reasons while staying within the boundaries drawn in mainstream culture.

But judging from the 2008 calendar the poses and fashions have been made considerably less risque. However, Gull says that wasn’t intentional.

I wouldn’t say they are purposefully toned down or subtle, just photographed much better. There are many factors that make this year’s calendar bigger and better than last year’s, one of the major reasons for the photographs being more “subtle” or “toned down” is that we actually developed a theme and had an art director on the set who helped to set up and direct the shoots. They are more artistically inclined, as opposed to last year, when we were learning as we were shooting. Because we had more resources this year, we were able to make the overall calendar have a much more polished look and feel.

The cover girl, Melanie Kannokada, is a Stanford-educated Miss India America plus a versatile dancer, pianist, and a former karate kicking champion. According to Gull, “Melanie was chosen not only for her breathtaking beauty, but because she represents a great message and is an ideal role model.”

In store for subsequent release are individual model videos, a behind the scenes peek and a 23-minute reality TV show shot during production at the Hamptons.

Share
SURVEY: CNN-IBN study on the dangers of being a woman in India →