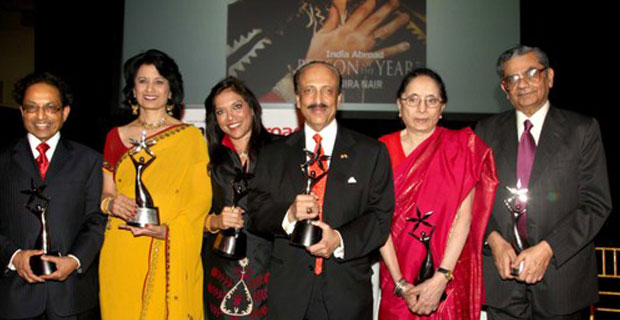 Manhattan’s glittering Gotham Hall was the site of this year’s India Abroad Person of the Year awards ceremony on Friday, March 28, 2008. Several awards were presented to winners selected by the editors of India Abroad, the country’s oldest South Asian publication.

Thanking Nooyi, Mira Nair confessed to the audience, “I hope to be her when I grew up,” Nair said: “The challenge really is in our heads, to be original – and it takes courage to be original. Especially for those of us who have been told for centuries that the west is the mirror in which they can say their future. But I’d like to say there is not one truth, there are many truths it just depends on who’s doing the looking and from where. For me, the mantras are simple. Safety and calm in family life, but bravery at work. A systematic dreamer, much like the awardees before me, I feel I must have a dream, I must have a vision, and then I work out very carefully a plan to achieve the vision.”

Nair has recently completed two short films written by Suketu Mehta. One is “Kosher Vegetarian” (with Irrfan Khan of “The Namesake” fame and Natalie Portman) as part of an anthology film, “New York, I Love You.” The other short, “How Can It Be,” is part of a UN project starring leading arthouse actors Konkona Sen Sharma (“Mr. and Mrs. Iyer”) and Ranvir Shorey (former video jockey, also played income tax officer Asif Merchant in “Bheja Fry”).

She is scheduled to start shooting “Amelia” with Oscar-winner Hillary Swank in two weeks. It’s a biopic about Amelia Earhart, the legendary American pilot who disappeared while flying over the Pacific Ocean in 1937.

The India Abroad Publisher’s Special Award for Excellence 2007 was presented to Dr. Renu Khator, president and chancellor of the University of Houston and its 56,000 students. She shared the learnings of the journey from master’s degree aspirant to educator-administrator.

Quoting Renu Khator, who said, “You gotta have a dream, even though your dream can keep evolving. You gotta have fire in your belly to go and persist and get that dream. You gotta have convictions to stand for your principles. And most have all, you gotta have the humility to know that it takes an entire community to reach a destination, no matter whatever it is, its never an individual accomplishment.” Her philosophy of life, as she called it, had the entire audience laughing: “When life gives you lemons and everybody is making lemonade, think about making margaritas.”

Professor Jagdish Bhagwati and wife Professor Padma Desai were awarded the the India Abroad Lifetime Achievement Award 2007 by Sir Salman Rushdie. Rushdie has received the same award last year. The economist couple is credited with helping create a blueprint for India’s modernization through their book, “Planning for Industrialization” published in 1968. Of course, India waited more than two decades before launching its liberalization efforts in 1991. Imagine where India might be today if it had followed their advice years earlier.

Professor Bhagwati, (see in this photo with his wife and Rushdie) University Professor of Economics at Columbia University and a leading free trade economist, enchanted the audience with his humble, spirited speech. Reversing the famous adage “Behind every successful man there is a woman,” he said, “In front of every woman is a man blocking her way.”

Professor Padma Desai, Professor of Comparative Economic Systems also at Columbia University, and America’s leading authority on the Soviet and Russian economies, traveled to the US in 1955 and completed her Ph.D. in Economics from Harvard University where she began her teaching career. She told the audience about her journey from small-town Gujarat to becoming a sari-clad Indian professor representing U.S.academia in Moscow. Their daughter, Anuradha Bhagwati, the first South Asian woman officer in the U.S. Marine Corps, was in attendance.

Dr. Joy Cherian received the first Lifetime Award for Service to the Community. He became the first Indian American in a senior US government position when he was appointed in 1987 by Ronald Reagan to be head of the Equal Employment Opportunity Commission. “I accept this lifetime service award on behalf of all those unsung heroes of the community who work very hard every day to make lasting civic and political impact on the American mainstream,” he said.

The India Abroad Youth Achiever 2007 Award went to Somdev Dev Varman of University of Virginia who became the first Indian-American NCAA tennis singles champion, a tournament won by Arthur Ashe, among other greats.

This was the sixth year of awards program, which was started in 2002 by India Abroad. Previous Person of the Year awards have gone to Pepsi’s Indra Nooyi in 2006, Bobby Jindal in 2005 (when he was elected to Congress), Olympic Silver Medalist Mohini Bharadwaj in 2004, Indicorps founder Sonal Shah in 2003 and the inaugural winner, Swati Dandekar, a state legislator in Iowa.