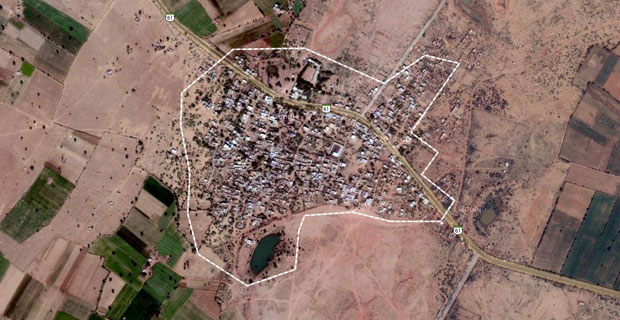 Here’s news of a village in India with an unusual name. The press in India have noted a village called America about 85 miles from colorful Jodhpur, in the heart of Rajasthan. From the Times of India story:

India’s own America is just a few kilometres from Falodi and Kheechan, famous for the migratory demoiselles crane. Its actual name happens to be Lordiyan, but, over the years, it has acquired the tag “America” – and each villager seems to have his own reason for calling it so.

“America” has 100% literacy and is self-reliant in many respects. “Our self-confidence is the reason people started calling our village ‘America’,” says Bansi Lal Vyas, 65, a retired schoolteacher.

His peer Lalji gives another twist: “Many residents of this prosperous village moved to Mumbai. Also the womenfolk of this village used to go to Falodi in groups for shopping and their affluence and attitude led people of Falodi to refer to Lordiyan as America.”

Resident Ashok Vyas, too, has a tale: “There’s a belief that if anyone utters the name of this village in the morning, he would either go hungry through the day or meet with some mishap. Thus, people started calling this village by different names.” This, according to Vyas, resulted in people gradually settling down on one name, and it happened to be America.

No word on whether they pronounce it “Amreeka” the way many northern Indians would say the country’s name.

Although the name appears to be somewhat self-assigned based on Indians’ perception of “America” the witticism and spiritedness behind the renaming make its usage seem relevant. In the days when the name was still catching on, imagine a hearty shop owner in a noisy bazaar. Bits of sunlight color the tarmac. In the distance, a few familiar women can be seen approaching his shop. As they reach the steps of his shop and wipe their sandals on the welcome mat, “Khama ghani hukam! Aaiye, aaiye!” (Greetings, Ladies!) Turning to the shop attendant, “Naya maal nikalo ji, Amrica wali aayeen hain! (Take out the latest stock, the American women are here to shop.)

Good sales that morning and the name finds a few more followers!

Early last year, SAJA covered a story about a “Lahore” In Orange County, Virginia by Imran Siddiqui of VOA’s Urdu TV Channel. Follow the link to read about how the name came about and the grand plans of a Pakistani American who had acquired some land at the time.

As for Lordiyan, it was not always America, neither ideologically nor by name.

Says Rajendra Saral, who translated many of Lenin’s books from English to Rajasthani in the 1960s, “This village used to be called Lalchin [lal means red and chin is hindi for China] (after Red China) due to belief in Communist ideology in 1960s.”

The village, about 1,500-strong, has nearly 750 houses with Pushkarna Brahmins dominating the social milieu, says Narsingh Das, the village sarpanch.

Long live the happy and united residents of America! Post your comments below.

Share
← SURVEY: CNN-IBN study on the dangers of being a woman in India
Q&A: Chris Murray, founder of the Govinda Gallery in DC →