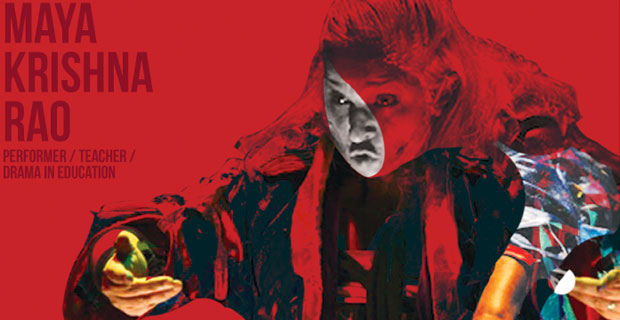 A socio-political cabaret I viewed in India in the fall of 2004 was titled A Deep Fried Jam. It was staged at the annual fundraiser organized by Mobile Crèches – an NGO that builds mobile creches for migrant laborers and their families. To put that in context, construction workers in India sometimes live on these sites in makeshift tents. They bring their kids to work. Children ages six months to seven-eight years play in the scorching heat, on the rubble at the roadside. This goes on for months, years, pretty much until the site is ready.

The artist was the internationally acclaimed, and traveled Maya Krishna Rao. Her “socio-political cabaret” was going to be a bag of surprises for me. And as expected, after two hours, I returned home, a hundred times richer. Having experienced one of the most powerful performances of my life, until then. Until now.

A flip-flop of bending and preserving rules characterized Maya’s show. And innovative use of media. It was a combination of video, performance, and music, Kathakali, craft, and many more forms of art I am currently unaware of. Maya delivered her narrative in poem and prose. She was supported by Ashim on the drums and vocals. Surajit handled a camera and two projectors. The drawings on the screen were by a young artist, Maya’s daughter Mimasa.

In discussion were issues like loss of Delhi’s natural green, political sabotage of Gandhi’s India, riots in India on “religious disparity”, builder-defined “development” in Delhi, health habits of a typical urbanite, and the vainness of traditional Indian dance forms. The commentary, the analysis, and the creativity of this production amazed me. And the name of the play ‘A Deep Fried Jam’ suddenly made sense!

It appeared to me, that Maya, the performer, had a dialogue with herself. Then, she put together a team and explored how she could best express it. Without using sentences to describe the situation. Just a tone that bears the essence of those words. Without using a direct image of what she tries to convey. Just a conundrum of images for the viewer’s cognitive interpretation. Without using the language of mudras conventionally taught to her during her training years in Kathakali. But a sincere application of her knowledge that conveys even to the uninitiated viewer.

Her show strung together a series of episodes, incidents that have left an impression on her fragile thoughts as a child and molded her into a woman with a voice of her own.

Let me describe a piece to you – the one that touched me most in her one hour show that evening.

It starts with a song “Will you walk with me today?” Maya is seated and a drawing board rests on the table before her. The audience can see her silhouette on the stage in the pitch dark. Surajit’s lens is zoomed in on the board which and casts the image on the screen behind her.

An illustration of a bird’s eye-view of a crossroad and a big yellow car captures the screen.

The song goes on to describe two children playing on the twenty-first floor at a construction site… hiding behind walls, chasing each other in demarcated doorways, peeping through windows, jumping on a cement mound and so on. The tone is matter-of-fact and rather enjoyable for anyone to find an abnormality in the game these children are playing.

The children on the roof of a highrise in construction, are really enjoying themselves, it is assumed, until the image on the screen changes. Two cut outs of a young boy and girl, attached to a stick, are now hovering above the drawing. Maya continues to hover them and a few inches below, the drawing of the road zooms to life. These no longer remain happy crayon drawings or cut-outs of a 7 year-old. They are now road and building, sky and earth. Flesh and blood. Life and …

Maya has quintessentially captured the life of a construction worker’s child and its proximity to a life-threatening situation. Even after several years, each time I recall the chilling impact of her performance.

As someone who had seen the conditions of these children growing up, and being involved with Mobile Creches for over five years, this portrayal was as graphic for me, as Maya would have perhaps wanted it to be. During her act, I imagined a scene play out — loud vehicular noise, squeals of children playing, construction work sounds in the background And a a child’s brawl, a thud and a car screeching to a halt.

Evidently,  Maya did not believe she needed to use those sounds. Sounds that are all to familiar in moving image / Hindi cinema which lack in rasa or meaning…

The concluding part of the performance showed an office space, on which Maya sequentially puts out magazine cut outs of luxury items – expensive door handles, elaborate drapery, electronics, a Labrador and so on. Presented in the context of construction workers’ lives, the meaning was clear.  It forces you to think about the irony  that these comfortable  spaces belong to the rich. Leaving behind the able-bodied  men and women who constructed these buildings. Call it the cycle of life. Or call it the cycle of man-made system of class.

There is no way to negotiate with this vicious cycle of rich getting richer and poor getting poorer. Maybe I should resign to an Hindu belief of karma and rebirth. That suggests that your fate is defined by your actions in the previous lifetime. and doing good in this lifetime will result in a better life. Alas! Only in your next birth.

This unpublished essay was written in 2004. This published version has been updated to provide context.