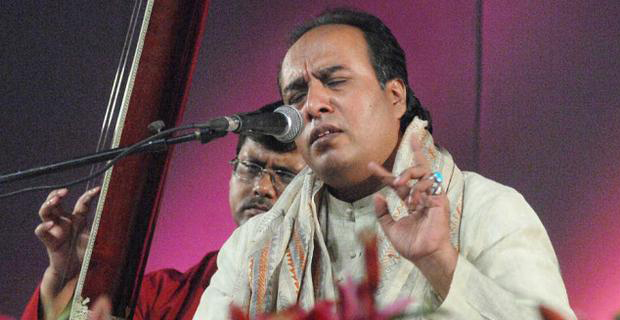 Ustad Wasifuddin Dagar, the young master dhrupad vocalist, is on a Spring 2008 concert tour which started on April 3, 2008 with a concert at University of North Alabama. His four-person ensemble includes Pandit Mohan Shyam Sharma, accompanying him on pakhawaj. The Ustad represents the 20th unbroken generation of dhrupad singers in the Dagar family, going back to the 16th century.

“Dhrupad, the oldest form of music from North India, is described as a meditative and contemplative style,” reads the release for the World Music Institute’s concert on April 5. “The performance of dhrupad is a prayer and endeavors to conjure in the listener an awareness of the One.” Austere, august, pure are words used to describe it, and accessibility is considered difficult for performers and listeners alike. Some well known dhrupad vocalists outside the Dagar family are Ashish Sankrityayan, Gundecha Brothers and Ritwik Sanyal.

One of the several aspects unique to dhrupad are the gamak and hudak, (explained in the Q&A below) described as “downward yodeling” by Jon Pareles of The New York Times in a 1983 article. In May, 2000, he wrote of dhrupad, and this time of Ustad Wasifuddin Dagar, “The music looked inward, making an offering of all the resources of the human voice”.

Ustad Wasifuddin Dagar talked to SAJAforum about dhrupad, the intricacies of gamak and the legacy he upholds. (Concerts in New York, NY on 5th April and in East Brunswick, NJ on 6th April)

You’ve been performing in the US since 2000. How do audiences here receive the art form?
The very best thing about the US audiences is their openness. They’re open to so many kinds of music, so many cultures. If you go back to India there are very few Western performances there, but when you come here, there are so many performances of different kinds of music of different parts of the world. And that makes the musician and the music accessible to them. We are able to share it with them easily.

Could you talk about nada yoga, one of the fundamental principles of the dhrupad tradition?
Sound production for dhrupad – how we produce sound. It is also called the yoga of sound. We have Yama, Niyama, Asana, Pranayama, Pratyahara, Dharana, Dhyana, Samadhi. Yama – how you commit to do something, niyama, you need tools, asana- you need posture, pranayama – how you have to breathe, pratyahara is detachment, dharana – you commit, dhyana is meditation and the ultimate is the samadhi. The way we sit and weave sound, we use the navel and different corners of the body to produce that sound. This is what we call nada yoga.

What are gamak and hudak?
We have 52 principles and 12 fundamental principles. Among them are the gamak and the hudak. These are the heavy sounds in the later part of the alap, produced with the help of the chest, the navel and also the diaphragm. It is producing the vibrant sound, with these parts of the body and taking the musical notes in a much rigorous way. We produce the vibrations. Man is capable of producing energy, and this is what the tandav is. Like Lord Shiva, does the tandav when he shakes the world upside down. This is the vibration that we create.

How do you think today’s generation is taking to dhrupad?
Today’s generation is much more open than it used to be two decades ago. This is a positive change. With youngsters I would just say that don’t think things are two clicks away from you. The people who are feeding this information have to work very hard. Don’t think that you’ll know dhrupad in two clicks, or two paragraphs, or two pages will explain dhrupad to you. Or khayal, or photography or cinematography, or biographies. Like the same word has many beautiful aspects, the same is with the musical note.

What are the implications of carrying a 500-year-old family tradition?
To be born into a family does not make you a musician. You need the talent and talent needs to be nurtured by your gurus. What happens in our families, that the father or an uncle, they become the guru. Our values and behavior are different with these people after that. The expectations are much bigger from us than anyone else. It’s very difficult to be a son of a big father. But, in India we believe in god. We can’t do without god. And when you follow the footsteps of your ancestors, their blessings are also there. Blessings are something that change fortune. The importance of blessing is very much there.

Short Bio
From the World Music Institute release: Wasifuddin Dagar, born in 1969 in New Delhi, began training with his uncle and his father from the age of five. After the untimely death of his father, he was groomed intensively by his uncle and was taught the crucial aspects of jugalbandi, the duo singing that has been a specialty of the Dagar family from generation to generation. As the Dagar Duo they toured extensively in India, Japan and Europe and made several recordings. Their music was the subject of a French television documentary entitled Dagarvani (1992). Since the death of his uncle, Wasif has performed solo throughout Europe, India, the US and Japan, and recorded for UNESCO. In addition to performing, he teaches dhrupad vocal music.