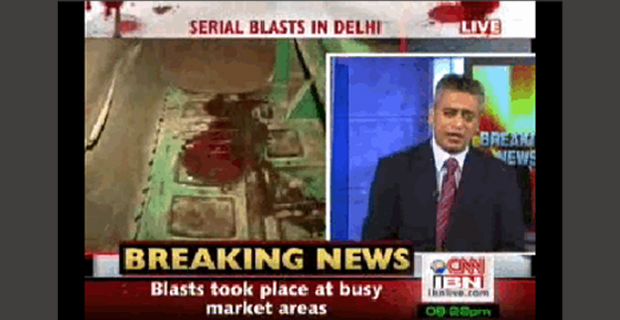 Here’s a screen grab from CNN-IBN’s streaming video of their Delhi bomb blasts coverage last month. I bring it up because I found this image seriously objectionable.

An objection on content launches a debate where the pursuit and depiction of truth make a strong case against sensationalism and distastefulness. And in India where 24-hour news channels seem to be profitable business and regulatory authorities appear to be trying to grapple with the new media environment the lines get even more blurred.

But how difficult is it to decode the graphics on this newscast? The band with spots of blood on top. The red vignette at the bottom. What journalistic intent justifies these aesthetic choices? Are they being used to highlight anything in particular or to heighten fear and create a spectacle of death itself?

In an environment where news channels are reaching new lows in order to generate TRPs and audiences feel frustrated at what they are being forced to watch, recent talks of self-regulation are a step forward. According to the Times of India’s article on August 25th, News Broadcasters Association (NBA) announced the setting up of a self-regulatory authority – News Broadcasting Standards (Disputes Redressal) Authority to enforce NBA’s code of ethics and broadcasting standards. More from the TOI article:

In a statement, NBA secretary Annie Joseph said the NBA “believes that media that is meant to expose the lapses in government and in public life cannot obviously be regulated by government, else it would lack credibility.”

She added that it “therefore falls upon the journalistic profession to evolve institutional checks and safeguards, specific to the electronic media, that can define the path that would conform to the highest standards of rectitude and journalistic ethics and guide the media in the discharge of its solemn Constitutional duty.”

The Association said that a “censure emanating from a jury of peers would indisputably affect the credibility of a channel.”

NBA’s CODE OF ETHICS & BROADCASTING STANDARDS as submitted to the government available on thehoot.org.

But if public awareness and the power given to regulatory/redressal bodies in India are to serve as a precedent, this solution seems to be an incomplete one. When matters are left to moral judgment and proof of intent, the powerful argue their way through with the help of a well-paid adviser and the righteous ones get jostled around for nothing. Or worse, hours are spent on finger-pointing in discussions destined to end without an outcome.

From Afaqs! news bureau’s coverage of a panel discussion on the question ‘Is self-regulation the answer to arrest visibly declining standards of reporting in electronic media’ during the News Next 2008, an event organized by Exchange4media.com.

Ashutosh said, “The news media acts as an informal stabiliser in a democracy. The hue and cry on the part of the government on exercising control over the electronic media has intensified in the past few years, because now, the empowered electronic media is boldly exposing the corruption prevalent in parties, in our political system. To save itself from this attack, the government alleges that news channels misrepresent facts or cross the lines of dignity and fair representation in matters directly related to the common man.”

Taking the argument a step forward, Pankaj Pachauri explained, “With democracy becoming 62 years old, media, in all these years, has not been responsible for bringing any disaster on the country and its countrymen. Agreed that with the satellite boom, the business of television news has become very sensitive, but the solution does not lie in laying down rules and regulations, because one has to realise that credibility is something that cannot be measured or quantified. It is very subjective and no particular individual, or for that matter, a government led body, can be trusted to precisely determine what is appropriate and what is not.”

All the three panelists representing news broadcasters blamed the TRP (television rating point) system for the blind race of dishing out questionable content. They argued that to stay in business, they had to play a very conscious game of dishing out the fare that the audience lapped up on rival channels. Even the slightest slump on the numbers front influenced media planners, and the channels faced immense pressure to not lose out on the crucial numbers so vital for their existence.

However, the speakers also concluded that without any doubt, the quality and integrity of content and the credibility of a channel came first and could not be violated. The discussion ended on the note that the quality control measures could not be imposed by the very government that stood threatened by these news channels.

Do you think that self-regulation is a good idea or should the government intervene? Post your comments below.